It was exactly 60 years ago today, that Doctor John Callaghan, and his team from Edmonton, Alberta performed the first ever successful open-heart surgery in Canada.  The following is an article chronicling that ground breaking event.

Of note, Dr. Callaghan was one of my late Father Jerry Forbes 'best friends' - and to this day I'm proudly good friends with Debbie Callaghan (Phillips) and husband Rod Phillips the Hall of Fame Edmonton Oiler Broadcaster.

This article is reprinted from the Express News - University of Alberta - from July 12, 2010 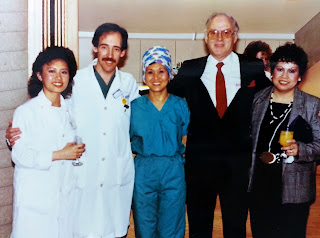 When the hospital unveiled the J.C. Callaghan Cardiovascular Surgery Intensive Care Unit in September 1996 to honour his pioneering work, the opening marked the 40th anniversary of the procedure, the first in a series of significant milestones from the early days of cardiac surgery.

The operation performed on Beattie would be considered simple by today's standards, but in 1956 it pushed the boundaries of modern surgery.

Using a modified distillery pump called the Lillehei-DeWall heart-lung pump, Callaghan and his team corrected their young patient's atrial septal defect. The pump, which ran on a gravity-feed system, had almost as many parts as a car: nearly 40 tubes of differing diameters and lengths had to be sterilized and connected before an operation could begin.

Callaghan handed credit for his team's success to the two American surgeons who invented the pump, Walton Lillehei and Richard DeWall.

Following research trips to the University of Minnesota, Callaghan and his team decided to follow Lillehei's exact instructions. "Walt Lillehei had mentioned that almost everybody who came to visit him changed something and it didn't work," Callaghan said in a 1996 interview with the Canadian Medical Association Journal.

"There were a lot of failures because a lot of people thought they were smarter than Walt Lillehei, but I knew fully that I wasn't, and we made sure there were no errors. That was the secret of our success."

Still, use of the Lillehei-DeWall pump could prove challenging.

On more than one occasion oxygenated blood spilled from the pump and coated the operating room floor. During one procedure, the pump itself failed. Callaghan took on the role of mechanic while Les Willox finished the operation.

Years later, a power failure knocked out a more advanced pump in the middle of a procedure. John Fortin, a member of the perfusion team, ran it manually for 80 long minutes, keeping the patient alive by applying brute strength.

Such events made for riveting stories, said Callaghan, but the work itself was relatively simple.

Callaghan, who retired in June 1990, was lured to the University of Alberta by University Hospital's chief of surgery, Walter Mackenzie, who first made overtures during a 1950 conference in Boston, where Callaghan had unveiled some groundbreaking work.

Callaghan, who graduated from the University of Toronto in 1946, had been involved in research on the use of hypothermia in cardiac surgery with Wilfred Bigelow of the Banting Research Foundation.

Meanwhile, Mackenzie had helped Callaghan land postings, such as a fellowship in cardiac surgery at Guys Hospital in London, England, and at Stanford University Medical Center in the United States.

It wasn't surprising, then, that at the age of 32 Callaghan was able to perform an operation many considered miraculous. Although Suzanne Beattie underwent the first successful open-heart operation performed in Canada, she was actually the fourth patient Callaghan's team operated on.

Just prior to beginning their work on Beattie the team lost two infants, but team members were confident about Beattie's case.

"We didn't have that 'I-hope-this-works' attitude," Callaghan recalled. "We planned to make it work and we just hoped the surgery part of it was not that difficult. It wasn't."

Experimental work on animals had helped the team learn to use the Lillehei-DeWall heart-lung pump properly and prepared Callaghan for the job ahead. "We knew our system was going to work because with the animals we operated on, we were able to do it."

We learned our skills on animals-they made a great contribution in the early days of heart surgery. None of us wanted to operate on them, but there was no way we could experiment on humans."

Beattie, who grew up to become a nurse in Yellowknife, NWT, was the first in a long line of successes at University of Alberta Hospital.

The first successful "blue baby" operation performed in Canada was completed in December 1956, while the first Canadian open-heart surgery performed to correct a complex form of the congenital heart defect tetralogy of Fallot was performed early in 1957.

By 1967, the hospital was performing 1,000 open-heart operations annually.

Callaghan said a study of the first 100 patients revealed the program's worst mortality rate, 25 per cent. However, the figure was considered a staggering success at the time; many programs failed because their mortality rates were simply too high. "Ours were always acceptable," Callaghan said. "The team was always ambitious and innovative."

Today, the hospital is one of the nation's busiest transplant centres; the Lillehei-DeWall pump has been replaced by heart-lung pumps, and the 10-hour operation Callaghan performed on Beattie takes about four hours. About 10 pediatric and 30 adult open-heart surgeries are now performed each week at the University of Alberta Hospital.

Callaghan's team handled one per week.

Although many open-heart procedures are considered routine today, there is still uncharted territory for pioneering surgeons to explore.

Today, pioneering work is being done in the areas of genetic engineering and microbiology, suggesting the possibility that heart tissue may eventually be provided by a laboratory.

In 1996, at the age of 73, Callaghan said the speed at which work is being done made him dizzy, because even very basic procedures used to take 10 hours. "Today, when you look at what has been done and research that's going on, it makes my work look naïve," he said. "When I got involved, little or nothing had been done-no one had ever taken over the heart's action. I got the easy work . . . any work today to expand the perimeter takes a lot more effort."

This salute was coordinated by Brian Brown who adds his thoughts on Dr. Callaghan.

Dr. JC Callaghan passed away April, 6th, 2004. This was just before I retired in August, 2005.  He also was awarded the Alberta Order of Excellence.

In my own career I started in Perfusion in 1972 and JCC was who hired me on staff. We had a great rapport and it was truly the saddest news to hear this.

Ironically he was born the same year as my Dad. He was an individual that had extremely high standards. Pushed me hard often. A true mentor and on some days a tormentor. It was quite the career and I have no regrets.

Here it is September, 18th, 2016.  Sixty years since Dr. J C Callaghan performed that 1st successful open heart procedure. He was a pioneer in Edmonton in Alberta and also in all of Canada.

There was never ever a dull day if you were tasked with working alongside him.

The picture is from Bernie Snell Hall at the U of A Hospital. It was the celebration of Dr Callaghan's 30th Anniversary.  (left) Betty Mah Pon a research / health analyst; Brian Brown; Board Certified Perfusionist; the charge nurse in Cardiac Surgery in the OR the late Alma Arndt;  Dr. Callaghan; To the far right is another nurse from the OR Myrna Najur who emigrated with her family to the USA.

Finally, Dr. Callalghan's is recognized in the lobby of the Mazinkowski Heart Institute, among others, with a memorial bust of his likeness. 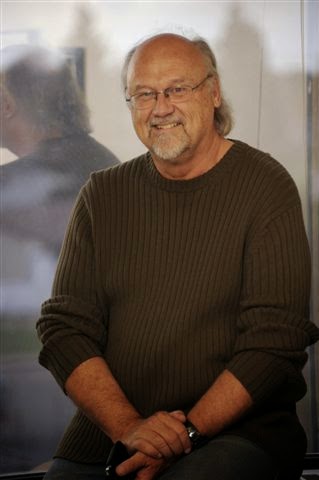